The title is not meant to be taken seriously except as a poke of fun at the notion that border between England and Scotland is set in stone and has always been there. It is essentially an excuse to counteract some of the anti-English propaganda found in films like Braveheart or TV series such as Outlander.  For example, the Battle of Culloden involved Scottish regiments fighting for the British side, and the Jacobite side had several regiments that suffered severely from desertion, plus a small English contingent; it was actually very little to do with England and Scotland, being rather more about religion and restoring the ousted House of Stuart.

But back to the borders …

The map above does not show Edinburgh, but it is on the northern edge of what is shown as Northumbria. The modern border is of course different; very roughly imagine a diagonal between the “Y” of Strathclyde, and a bit north of Bamburgh. The modern border was pretty much defined by the battle of Carham (or Coldstream) in 1018 when two Scottish kings (technically one was the king of Strathclyde) defeated an Earl of Northumbria. Later significant border changes worked out to be more or less temporary in nature.

This defeat (and loss of territory) was accepted by the kings of England partially because it has been alleged that the defacto border reflected the new border – England would have been quite weak in enforcing the “king’s peace” given it’s struggle to survive (essentially it didn’t being eventually conquered by the Normans which were essentially Danes or Norwegians with a French accent).

It is also the case that Northumbria would have seemed a remote part of the kingdom to both the Anglo-Saxon kings (most of whom were originally based in Wessex in the south), and to the Normans who were also distracted with “issues” in France. A case of not bothering when there were bigger issues at stake.

Which may very well have been a contributing factor to the North being somewhat grumpy and inclined towards rebellion; so much so that when Charles I raised his banner in the north to defeat parliament he was seen as a rebel.

So did those Northumbrians see themselves as Scottish after 1018? Almost certainly not, but they may very well not seen themselves as English or even Northumbrian either. The common people were far more likely to put more importance to their pre-medieval clan allegiances, and their medieval feudal lords. And those classified as clan chiefs or feudal lords would have pled allegiance to any overlord or king who was in a position to assist them.

To make things more complicated, the kings of Scotland often held the Earldom of Northumbria (thus were in theory required to swear allegiance to the English king) or Cumbria. Of course as an alternative to paying homage, the Scottish kings were just as happy to invade England – on at least one occasion reaching as far south as Dover.

And no medieval army behaved well on campaign – rape and pillage were considered standard forms of warfare at the time – so it is worth remembering that the English invasion in 1296 did not come in a vacuum. Yes the English behaved terribly in Scotland, but it was standard behaviour for armies at the time – soldiers expected to make money through plunder.

Trying to determine who invaded whom first is pointless not just because the conflict disappears into murkier periods of history, and because smaller scale “wars” (raids) probably occurred nearly constantly. The Scottish borders were a place of nearly constant raiding back and forth until at least the 17th century – there was even a special legal system in force in the borders (not that it helped much), and “real wars” were often raids on a larger scale.

So yes it is possible to argue that Edinburgh is English (and a great way to start an argument), but more importantly this all illustrates that nations are created and not natural. Someone from Berwick-Upon-Tweed could reasonably claim to be English, Scottish, Northumbrian, or even Bernician. If you look closely at history, you can actually see that nation-building happening with kings re-enforcing the notion of nation in order to protect their centralised power against magnates with ambition to replace them.

Just because nations are artificially created does not mean that they are meaningless, but it doesn’t do any harm to remember that they are artificial and that people on the “wrong” side of the border are different only in that some ruler from the distant past declared that they were different. Most national borders get fuzzier as you look closer at the people living near those borders. 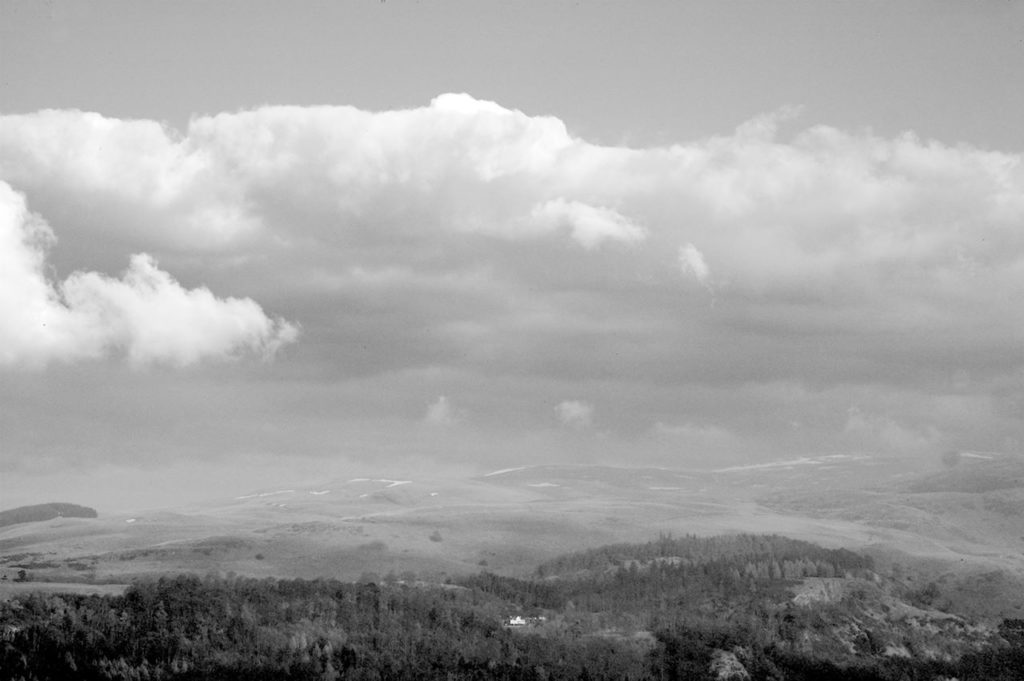 This is of an apparently isolated home surrounded by some spectacular Scottish countryside complete with an interesting sky.

You often find the far right making ridiculous claims about the virtues of the ‘anglo-saxon’ race and assuming that the modern English people share those virtues. They use this as a justification for being hostile to modern immigrants as though the English race is something special that needs protecting. It is curious that these people are so ignorant of the history of the English people given they are so proud of it.

The name for these collected islands is “Britain” which originates from the original “Brython” being the Celtic name for these islands. For many centuries, the Celts had these misty isles to themselves, but then the Romans arrived and stayed for a while. Of course it was not only Romans who came but many people from all over Western Europe who had some reason or another to visit our islands. Then they left, except of course they did not really … at the very least they left many reminders of their visit, including not only Roman civilisation (which many of the Celts readily adopted and modified) but intermarriage is never as rare as people think.

We mistakenly believe that all the Celts up sticks and moved to Cornwall, Wales, Scotland, Ireland, and Brittany once the Angles and Saxons started arriving, however that is very unlikely. Sure many Celts moved to those places, but most probably stayed right where they were and stayed peasants under different landlords.

The concept that the ‘anglo-saxons’ were a single people is similarly mistaken … they were Angles, Saxons, and Jutes (at least … we do not know for sure that there were not others as the Romano-Celts had tried hiring mercenaries from wherever they could find them and many of those stayed). Although the three named tribes were probably pretty close, they were still distinct people.

Then of course we had the Vikings, raiding, raping, and eventually settling. And then the Normans (of course being Vikings who had settled in Normandy) turned up and threw the Anglo-Saxon royalty out on their ear.

Then far more recently we had a world empire (by far the largest the world has ever seen) where we had people from all over the world visiting, staying, and intermingling.

These are just the big waves of immigration. Many smaller waves of immigration have happened throughout our history. Almost everybody in England will probably have a mixture of Celtic, Anglo, Saxon, and Viking blood with a small pinch from almost anywhere.

Channel 4 recently had a TV programme about DNA testing of a random sample of English people to test what their ancestry was … and the results indicated that most had very mixed backgrounds. Not really much of a surprise given our history.

So if anything modern immigration is a good thing because it gives the English people more of what made us great.