A while back something popped up on my Facebook stream claiming that Pushkin (Alexander Pushkin – the Russian poet) was black as a way of saying “look at all these incredible things blacks have done”. I don’t have a problem with that. I might just question the logic of classifying Pushkin as black.

Of course I also question the use of the colour of the dead stuff that keeps the squishy bits on the inside, to divide people into arbitrary categories. But we’ll gloss over that for now.

Pushkin was at least partially black because his great-grandfather (Abram Petrovich Gannibal) was black; that’s one sixteenth. So he was also 15/16ths white. Can someone be both black and white (presumably without stripes)? Of course the racists amongst us were the ones who set the standard for excluding people from the privilege of calling themselves “white”. And just to irritated the bigots, it pleases me to declare that Pushkin was white; and to avoid making those who look to trumpet the accomplishments of black people foolish., it also pleases me to declare that Pushkin was black.

Which is ridiculous of course, but that’s kind of what I feel about the whole obsession with skin colour anyway.

And finally, take a look at Abram’s bio – he’s probably more accomplished than his descendant Puskin.

To be a nice person there are all sorts of things to avoid – racism, sexism, transphobism, ableism, and probably a whole lot more -isms. Which is really rather complicated but it can be boiled down to the very simple :-

Just don’t be an arsehole.

That’s it. No special magic, just treat everyone in the way you would like to be treated :-

But it can all be simplified – if someone isn’t directly causing harm to others, what they are up to is their business not yours. Just don’t be an arsehole.

Of course it does.

But let us go a little deeper.

First of all, does race really exist? It is notable that the Wikipedia articles on race (1 and 2) distinguish between biological race and the definition of race as it applies to humans. The later seems to be a rather vague term defined differently in different places or circumstances and as someone who likes clearly defined terms the temptation is to go with the biological definition of race and declare that humans are all one race.

But people do insist it exists. So lets take a look at the “white” race; a supposedly monolithic race. But in reality it subdivides up into different “racial” subgroups – the Irish, Finns, Arabs, Jews, and the Romani have all been at times classified as non-white. At what proportion does non-white ancestry qualify one as non-white? In the US, the standard varied from 1/4, to 1/16, or any African ancestry at all (which excludes every single person from being classified as “white”).

Nothing illustrates that US “whiteness” is a qualification for a privileged position (“white privilege”) more than the one-way one-drop rule which although no longer part of the law is still widely accepted socially. If you have one drop of non-white “blood” (ancestry), you are non-white; yet the opposite doesn’t apply – one drop of white “blood” doesn’t disqualify a person from being black.

Which means that racism is little more than an excuse to divide us all into “them” and “us”. Which neatly leads on to the second point.

Many of these ‘isms – racism, excessive nationalism (and xenophobia), … – are just means to an end. To divide us up into “them” and “us” so we can blame “them” for everything that is wrong. Just like the school bullies, we can pick anything to divide people into “them” and “us” – wear glasses, be too tall or too short, gender, a built-in tan, … just about any stupid reason can be used.

With this in mind, racism is using an invented means to divide people just to bully one category. Silly isn’t it?

Lastly some of us have a suspicion that the fires of racism are stoked by those in power as a means of distracting the proles from the real enemy – unrestrained capitalism. Next time you wonder why that immigrant is allowed to steal a well-paid job from you, instead wonder why there aren’t well-paid jobs for both of you.

Yes racism exists, but it is as childish as schoolyard bullying and based on little more than the arbitrary grouping of people. And those who promote racism might just have a hidden agenda.

Trump’s twitch. No not that one, the tweet about certain congresspeople “going home” (despite the fact that of the four women targeted, three were born in the USA).

Quite rightly it has been labelled as “racist” but without meaning to minimise that criticism, that is a personal insult to the four women (and we can get outraged on their behalf). But something that has been less pronounced: it’s also an insult to every single voter who elected those four women.

And this attack on democracy is as important to highlight as the racism.

The US has long had an abysmal record in extra-judicial execution by the mob – the lynching – which is a peculiarly US foible. It is noticeable in the linked Wikipedia article that the authors were desperately looking around for non-US examples of lynchings. And some of the examples are not strictly speaking lynchings at all.

There are plenty of resources out there on US lynchings including :-

Practically all of these sites concentrate on the racial aspects of lynchings, which is perfectly understandable given that lynchings were one of the many weapons white supremacists used to keep the negro “in his place”.

Yet there is another aspect to lynchings that tends to get overlooked. If you look at the lynching statistics provided by the Tuskegee Institute covering the years 1882-1968, of the total of 4,743 lynchings a total of 1,297 were of “white” people. A total of 27% of all lynchings were of “white” people. Of course that simple classification into black and white may be concealing other race hate crimes – apparently asian and mexican-american people have been classified as white on occasions. 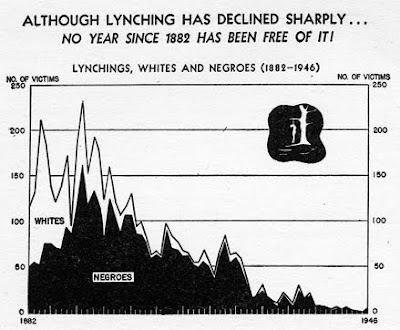 But reading the stories of lynchings shows that the victims of lynchings were from all parts of society – men, women, black, and white. But predominantly black, although the last lynching of a white person occurred as late as 1964 when 2 white people and 1 black person were lynched.

But it’s missing a point – lynching is a tool used by the racists to repress the black people in the US, but it already existed as a tool (and was used) before the racists felt the need to repress and control the newly freed former slaves. Lynching is a way of obtaining “justice” when a community feels that justice is unlikely to be obtained any other way.

What appears to have happened in the US is that some communities seem to have acquired an entitlement to extreme forms of justice and they are not placated by the perfectly reasonable level of justice provided by the state. After all, in many of the examples of lynchings, the state justice mechanisms were “working” perfectly well – certainly a black person in the South was likely to be flung into prison for almost anything on the flimsiest of evidence. Yet the extremists were not satisfied.

What this reveals is that some in the US feel entitled to impose a level of control on their community that is not sanctioned by the democratic majority of the country as a whole. And a willingness to resort to violence to get their way. Whilst lynchings may be a thing of the past (the last recorded one was in 1981, although there is a case for arguing that this was merely a random killing rather than a lynching), the attitude may still be around … and having an effect on the level of violence in the US.

The anti-gun control fanatics are right to an extent when they claim that “guns don’t kill” but criminals do. If you compare the US gun crime statistics with other countries with similar levels of gun control (and there are some; indeed in Switzerland a significant proportion of the population is compelled to store a fully automatic assault rifle in their home), it becomes obvious that the US has a significant problem with violence. Gun control may be necessary in the short term, but long term the US needs to look at it’s violent tendencies.