The not quite so old method of holding music is the Compact-Disc (or CD) which uses stores the music digitally rather than in analogue form.

The newest method is the “digital download” and is itself as complex as all the previous methods put together. Because the playback of digital music recordings is basically software, it is possible to introduce new “formats” every so often – so we have MP3, Ogg, FLAC, etc. Most of these formats compromise on music quality in favour of smaller file size so they can be downloaded quicker and you can fit more of them on the average portable music player.

However for the purposes of comparing with LPs and CDs, I will only consider high-resolution FLAC files which do not compromise on quality over file size. Specifically FLAC files with a better than CD quality, and yes they do exist.

Having said that, which of the three is better: LPs, CDs, or digital downloads? The answer is complex, and depends upon the what you want to get out of an album. It also depends on the manufacturing quality – a poorly pressed CD on inferior materials does not compare well with a good CD; and perhaps even more so for an LP.

The Physical Experience and Longevity

In terms of an object to be appreciated in addition to the music nothing beats the LP. Excluding the disc itself, the album art is large enough to be fully appreciated. This is for many an important consideration, but personally I buy recorded music for the music and not for the object d’art that it comes on.

In terms of longevity, nothing lasts forever, but a DRM-free digital download is perhaps somewhat surprisingly in the lead here. Providing that you have a good backup regime, there is no reason why a digital download cannot be passed on to your off-spring.

On the other hand, LPs are subject to various forms of damage that can occur by chance every time you play one – even the playback causes a very tiny amount of damage unless you use a laser-based record player. And every bit of damage (or dust) causes a deterioration in the quality of the playback.

CDs have certain advantages in this respect because it is digital and there is built-in error correction so smaller errors get corrected.

However neither physical medium will last forever, and a poorly treated LP is likely to deteriorate significantly in a relatively short amount of time.

I very strongly suspect that the preference that some people have for analog has nothing to do with the fact that it is analog. If you play back a quality LP through a high-end system, it may seem to sound slightly better than a CD. But I have listened to very high quality digital rips of LPs played back on a high quality digital music player, and have heard the same effect – even including the added “warmth” that LP playback supposedly gives you. 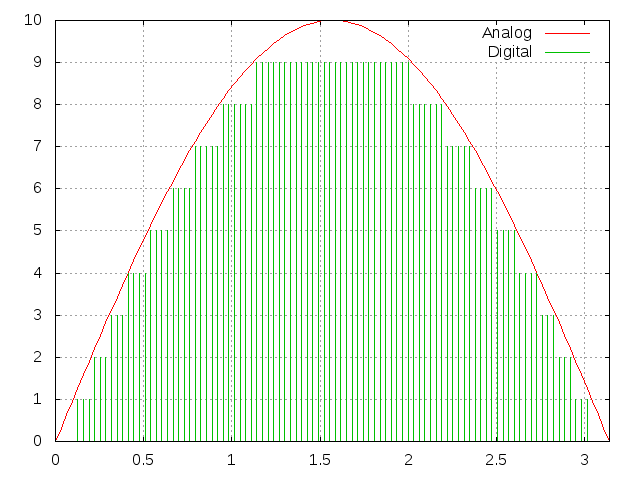 The graph above is a very exaggerated demonstration of the difference between a “perfect” analog signal (which frankly doesn’t exist) and a very rough and ready digital signal. The distance between the green lines is representative of the sample rate – how many times per second a digital value is measured. The vertical scale of the green lines is representative of the number of bits used to measure each sample – in this case it is far too few leading to a dramatic staircase effect.

The digital version can be improved by increasing the sample rate and increasing the number of bits for each sample. Increase it enough, and it is impossible to distinguish between the digital and analog versions.

But increase the sample rate to 192KHz and the resolution to 32-bits, and you are talking about some really rather large files. Which is why CDs are just 44KHz and 16-bits; at the time CDs were developed, it was felt to be a reasonable compromise between quality and the need to keep storage requirements down.

One thing that is often overlooked is that CDs contain a lot of error correcting data – 20% of the storage capacity is error correction data. This allows the CD player to correct any read errors that occur (up to a certain level). Nothing else has this level of error correction with the exception of a digital download if it is held on an error-correcting file system (such as ZFS).

This section implies that analog is “perfect”. In case anyone believes that, try reading up on wow, and flutter. And indeed the full details of analog vs. digital. Whilst analog in general is no worse than digital, the specific analog method used for LPs is inherently less detailed than the amount of detail available in CD quality audio and indeed high-resolution digital downloads.

The interesting thing about the so-called “warmth” that LPs provide is that this is effectively making a virtue of the weakness of LPs. The old terms for LP warmth are “muddy bass” and “rolled off high end”. Listening to the warmth of LPs may well be a better experience but that does not make LPs better for music playback.

Judging by some of the snake oil around digital music, compression is not very well understood – for example. there is a fairly popular myth that the audio from FLAC can be improved by uncompressing into WAV format and then playing it back. There is possibly a very tiny advantage in doing that if you happen to have very poor quality digital equipment, but the advantage would be miniscule. That advantage would be simply down to the hardware/software being unable to uncompress and play back the audio stream at the correct speed all of the time.

There are essentially two different forms of digital compression – lossless and lossy. The former can be uncompressed to produce a digital stream exactly the same as the original, and the latter does not. Lossy compression is much smaller in size, so it is better suited to small portable music players, although there is no reason why small portable music players have to have such small capacities for storage (my current portable player has 256Gbytes of storage and my previous portable player had 240Gbytes of storage).

When you come down to it, music is not about digital or analog, it is about the music. And to many quality is also a desirable aspect. This can be obtained with analog or digital, but to a great extent digital is more convenient.

If you are after quality, there is no need to switch to analog to get it – digital music can be just as filled with quality as analog providing that you do it properly.

But most importantly, enjoy the music!